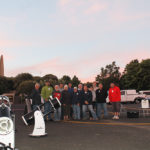 Always feeling awkward and shy when approaching some astronomy groups, I was blessed when my passion for the stars eventually guided me to the Orion Observation Group (OOG). It took one phone call to Serena Ingamells to know that I had found a very special group of people.
Serena Ingamells (chairlady) and Willie Koorts (chairman) made me feel so welcome. I became one of the family immediately. They taught me so much and gave me wings to fly.

Sharing one’s passion for the night sky comes as second nature to amateur astronomers. We soon found ourselves hosting a Stargazing Picnic at the Taal Monument in Paarl. The recipe worked so well that we were invited to stay on for regular events during summer seasons. Over the years we have introduced hundreds and hundreds of people to the night sky.

Being an amateur astronomer you have to be on your toes. Your field is vast. You draw on the strengths in your group.

The build up to a Stargazing Picnic was exhilarating. It was never difficult to convene the telescope team. My station was the (VW Caddy) Outdoor Classroom. I chose a theme for each event and prepared posters and handout material. Sunny days usually meant clear nights. The only calls were for late bookings. Cloudy days were another matter. My cellphone rang constantly. Many times I went with my gut feeling and hardly ever cancelled a Stargazing Picnic unless 100% rain was predicted. People from afar were advised to come on another evening. People from Paarl, Cape Town and surrounds could decide for themselves but I made it so inviting that most decided to come along and join the fun. Sometimes I would arrive at the Taal Monument to see the sky clouded over. I believed that if I ignored the clouds, set up the traffic cones, flags and posters, the clouds would get bored with me and drift away ..and many times they did or at least left a hole for us to show the Orion Nebula or Jupiter.

We gave it our best and The Taal Monument staff were always supportive and friendly. Pierre and Doretha of the Volksmond Coffee Shop on the terrain spoiled us rotten.

I organised the Stargazing Picnics for 11 years and then it was time to hand over the portfolio to two special people with a bit more youth on their side, Johan and Alma le Roux.

The Orion Observation Group will go from strength to strength. With no official committee structure and as total volunteers, the two founder members Serena Ingamells, Willie Koorts and all OOG members still welcome anyone who has a passion for the night sky and during summer months their telescopes are set up once a month at the Taal Monument to inspire young and old to look up and appreciate the night sky.

The Orion Observation Group has a Facebook Page: https://www.facebook.com/OrionObservasieGroep