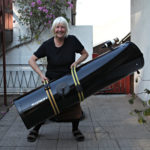 I’d say I lead quite an ordinary life though others have disputed this ….
My interest in the stars started in my teenage years but was more of a romantic fascination than serious Astronomy.
I was in my thirties, sitting outside one evening at our holiday home in Betty’s Bay, which had been an eleven year d.i.y building project, when I noticed a faint fuzzy in the night sky and wondered what it could be.
Very soon my library book list which had included titles like “Bricklaying is Easy” “Pottery kilns and firing techniques” “Porcelain Doll Maker” “The Ultimate Squash Player” changed to “Observing the Constellations” and “Observing without a Telescope”.
Watching television came second best to looking at the night sky through binoculars.

My husband quickly caught on that something was brewing and surprised me with a 4″ Tasco with seriously impressive specs on its box. I started observing conservatively and saw amazing objects, however, when I jacked up to 300X magnification as advertised on the box, the image of Jupiter would turn into a saucer-like UFO. After one month I hinted that I would most probably have to upgrade to a slightly larger telescope some day.
An 8″ Bushnell Dobsonian with no spectacular promise of magnification on its box accompanied my husband home from work a few weeks later. When he opened the car’s boot to surprise me, I looked over my shoulder to see whether the cops had followed him because the first thought that crossed my mind was that a telescope that filled the boot must have cost more than the car and that I was staring at stolen property. My shock wore off the moment the telescope saw first light. Herschel’s jewel box sparkled and at that moment I fell madly in love with my telescope and with Astronomy.

My library took on a whole new look.

I taught myself to observe and bumped into a boffin by chance. He subtly adjusted my approach in order for me to achieve more formal results. Deep sky sketching became a fulfilling hobby. Then I learned that the international standard of direction was North up and East to left. Drat! just as I was having so much fun I had to adjust all my sketches before submission for scrutiny by the Deep Sky Director of the Astronomical Society of Southern Africa.
Before an observing session I consulted various star charts as having to wear reading glasses makes things more difficult at the eyepiece. I try to memorize the location of objects as much as possible beforehand. Once found, I do sketches which make more sense to me than just written observations. The less paraphernalia I had around me in the dark the better.
Other than my telescopes (a 12″ Dob was now also part of the family), my light box on a tripod which I sometimes used just as a table  became a favourite piece of observing equipment. “Specs on, specs off” had become much easier without having to balance a clipboard and pencils on my knee.
Although I loved to stargaze with a group of enthusiastic people, I liked to observe alone. Apart from the fact that I talked out loud while sketching (which sounded something like :OK one bright one in the middle two not so bright left, faint one twice the distance and…..) there was something magical about being alone under a dark sky. While everyone else was asleep, the universe belonged to me.
The length of my observing sessions varied. When I had the opportunity to drive out to dark skies, I planned for a whole night or preferably more nights of observing. At home I did shorter sessions in light polluted skies to combat withdrawal symptoms.
Whenever I looked through my telescopes, I got so excited that sleep was the last thing on my mind and out in the veld there were usually little (sometimes big) things that went bump in the night to provide the extra adrenaline.
My advice to someone who wants to take up deep sky observing, apart from the best equipment to suit your pocket and circumstances, is to forget what you see in books and on the internet. Get hold of a list of deep sky objects and a star chart and go on your own journey. Even the most basic equipment will provide you with a wealth of objects to explore.