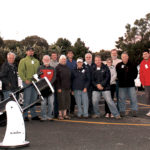 Women in Astronomy. Yes the playing field is far from 50/50 and much needs to be done to encourage young girls to pursue careers in Astronomy with equal opportunities for all.

I am aware of the world-wide movement to better the situation of every women in Astronomy, be it professional or amateur.

In the same vein we must not push aside or step on our male collegues and friends. Come to think of it, males outnumber females in all my astronomy circles. I have not given that much thought. In my quest to learn as much as I can, gender has never played a role. I have been taught, guided and inspired by amazing gentlemen and women. Should I be keeping statistics, how many men, how many women?

There are reports of women being harrassed and yes the issue needs to be addressed urgently.

I have never been harassed, bullied or shoved aside by men. I have never felt intimidated and so I have to thank all the men for putting up with me, for all the ecouragement and inspiration and especially for the time they have spent to teach me well. Maybe I’ve just been lucky. Maybe it’s much harsher in the professional world.

Were should woman start? Be a woman. Be beautiful. Be focused. Be professional. Be kind. Be sympathetic. Be nurturing. Be determined but never evil.

The LSST – what big eyes you have
As the wolf in Little Red Riding Hood said, all the better to see you my dear

Halfway between first brick and first light the Large Synoptic Survey Telescope (LSST) is under construction in Cerro Pachón, Chile and on completion will be like no other. Its 3-ton camera will be the largest digital instrument ever built for ground-based astronomy and will take pictures fast enough to capture the entire southern sky every three nights.  According to Andy Connolly, Professor of Astronomy at the University of Washington and Team Leader for LSST Simulations, the Hubble Space Telescope would need 120 years to image an equivalent area of sky. The combination of a 3,200 mega-pixel camera sensor array, a powerful supercomputer, a sophisticated data processing and distribution network, the massive telescope promises to cast light on mysteries fundamental to our understanding of the Universe. From the distant signatures of dark energy to the dangers of near-earth asteroids and everything in between, the LSST will capture it all. Three central considerations dictated the design: that it be wide, fast, and deep. The telescope with its 8.4-metre primary mirror will take images that cover 49 times the area of the Moon in a single exposure.

The word ‘synoptic’ comes from the Greek ‘synopsis’ and refers to looking at all aspects of something. With its unprecedented collection of more than 800 panoramic images each night it will, over a decade of operations, collect tens of petabytes of data, building up the deepest and widest image of the Universe. First light is expected in 2019. Once operational everyone will be able to share in the excitement and discoveries with planned activities for education and public outreach.

My personal thanks to Prof. Matie Hoffman for the heads-up