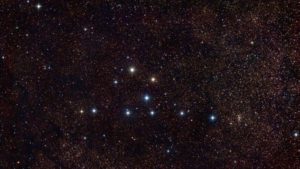 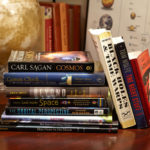 I always thought one was either a sci-fi lover or not but over the last 50 years the border has become so blurred I believe most stargazers have at least one foot in the sci-fi camp.

Jules Verne started writing his stories in the 19th century and predicted that we would put three men on the Moon in a spaceship called Columbia – 104 years later NASA did just that – well more or less. Add the stories of Mark Twain, Isaac Asimov and Arthur C. Clark and you will find the key to much of what we see today: radar, the atomic bomb, the Internet, flat screen TV and the Ipad. For fun don’t omit to dip into Douglas Adam’s “Hitchhiker’s Guide to the Galaxy”. He was not only the inventor of the Pan Galactic Gargle Blaster but also said: “Nothing travels faster than the speed of light, with the possible exception of bad news, which obeys its own special laws”.

In truth good science fiction is based on good science. Most of the writers have sound academic training which illuminates the way for the scientific community.

Known as the ‘man who invented tomorrow’, H. G. Wells, a trained botanist, is generally regarded as the father of science fiction. In 1938 a radio adaptation by the Columbia Broadcasting System in the USA of “War of the Worlds”, depicting an invasion of Earth by Martians, was so realistic it caused widespread panic amongst the public.

Eventually Hollywood entered the arena and a whole new world opened for the enthusiast. Top of my list is “The Martian” which tells the story of an astronaut who is left stranded on Mars after his team assume him dead. With basic science one can follow the story without much trouble (…. may his rest be calm and placid he added water to the acid etc, etc). Together with “Gravity”, “The Europa Report” and “Interstellar” you have grand viewing during the cold winter months.

“Leviathan Wakes” (Orbit, 2011) and the other books in “The Expanse” series by James S.A. Corey