Reach me down my Tycho Brahe, I would know him when we meet, when I share my later science, sitting humbly at his feet; He may know the law of all things, yet be ignorant of how we are working to completion, working on from then to now ● Sarah Williams, Twilight Hours: A Legacy of Verse 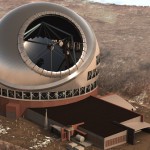 The erection of a new large telescope has always been an exciting event for scientists in the field of Astronomy. The protests against the the proposed Thirty Meter Telescope to be erected on Mauna Kea, Hawaii, are gaining momentum as crowds gather “from Oregon to Kentucky, New Mexico, North Dakota, Georgia and Massachusetts, Korea, New Zealand, England and Germany. Many of the gatherings are being spurred by social media”

As an amateur astronomer I am torn between two sides. When I read the articles, posts and comments of the Hawaiian community, I realise the huge difference between the importance of Mauna Kea to astronomy and the Hawaiian culture.
I am always advocating the importance of preserving nature. Astronomers were the first to realise the harmful effects of light pollution on our planet and all living things. I set out to do astronomy, feeling that I would not only be doing science but also be contributing to the worthy cause of protecting and preserving.

The Thirty Meter Telescope will surely be an impressive sight and eventually the data it gathers will reach billions of people all over the world.

To astronomers the site of the Mauna Kea Science Reserve, which hosts 13 observation facilities, is of utmost importance. It is one of the world’s premier observatories for optical, infrared, and submillimeter astronomy.
In Hawaiian culture Maunakea, also known by its original name Mauna a Wakea is a sacred place. Wakea, sometimes translated as “Sky Father” is considered the father of the Hawaiian people.

I would never join a protest against the erection of a giant telescope and I do hope the “Sky Father” will give his blessing to the TMT and that the Hawaiian people will eventually be as much in awe of this magnificent structure as the engineers, astronomers and scientists and that in time to come accept that TMT was designed to bring our civilization closer to the stars.

James “Kimo” Kealii Pihana, Maunakea Ranger and Hawaiian Cultural Practitioner writes: “As a ranger on Maunakea, I’ve enjoyed working with many astronomers, who are generally people of good will and from whom I have learned much about the stars. But despite all of their scientific accomplishments, I do feel that much more needs to be done to bring awareness of and respect for Hawaiian culture on the mountain. Science does play an important role in people’s lives, but it is not everything. A spiritual connection is just as important. This is symbolized for modern Hawaiians by the humble stone and wood lele, the altar, at the summit”

“Science has a cultural history, too, with roots going back to the dawn of civilization. The same curiosity to find what lies beyond the horizon that first brought early Polynesians to Hawaii’s shores inspires astronomers today to explore the heavens. Calls to dismantle all telescopes on Mauna Kea or to ban future development there ignore the reality that astronomy and Hawaiian culture both seek to answer big questions about who we are, where we come from and where we are going” -Scientific American