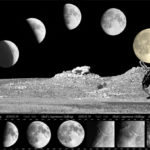 Another Supermoon! – The third for 2019. Jan Feb March..no, not April May June July.. and NO to all, according to Neil deGrasse Tyson.

To set the record straight: Niel deGrasse Tyson is thé American astrophysicist, author and science communicator who is not related to Michael Gerard Tyson, an American former professional boxer as was suggested in  the “Mike Tyson Mysteries”, which is an American adult animated television series, produced by Warner Bros

Niel deGrasse Tyson has been trying desperately to negate all supermoons  by tweeting: “Supermoons are an insult to Superman or supernovas, if a 16.1 inch pizza is ‘super’ to you, compared with a 16.0 inch pizza, then we have an issue of vocabulary”

Those who are really into Astonomy, professionally or as amateurs, understand why the fullmoon appears bigger on the horizon during certain months of a year. The Moon’s orbit is not circular taking it closer or further away from Earth. This is stuff most people do not think about from day to day. The media has actually done us a huge favour by “superfying” the Moon. The hype surrounding these events has added terms like perigee, apogee, perigee-syzygy! to the vocabulary of a much wider audience  while the Moon is getting the attention it deserves.

Fullmoon at perigee. Lights off!..cameras..cellphones..action.. The excitement usually starts two weeks before fullmoon when the first slither of a crescent becomes visible. Social media becomes abuzz with moon images and supermoon challenges. The frenzy is contagious and this is what we want, is it not? The whole aim is to get as many people as possible involved, inspiring them to learn more about our Moon, the workings of our solar system and our place in the universe. Three or four times a year there is this window of opportunity to reach out, especially to the younger generation, to become involved in astronomy, science, engineering or any technology that will get the human race on voyages into space. Three or four times a year writers, poets, lyricists or painters are made acutely aware of the beauty of our universe.

I beg to differ from Niel deGrasse Tyson. I will not get on his snobbish band wagon just to show that I know a bit more than meets the (Supermoon) eye. On every one of these enchanted evenings I will be outside, online or paging through a book about the Moon  if the weather is unfavourable. I hope I will never become blasé and ignore a Supermoon.

Recently the online observatory, Slooh, proposed a Supermoon Challenge. The idea for my entry was sparked by watching my grandchildren at play. The brief was that we should use the online telescopes to take images of the Moon from crescent, waxing to fullmoon. Due to weather conditions in the Canary Islands, I could only capture the images that I used in the “film strip” line up at the bottom of my image. The images of the Moon that my grandchildren are playing with are my own. The backdrop is an image taken on route to a little town, Leipoldtville, in South Africa.  Submissions had to be in before the special livecast which was on 20 Feb 2019

Three submissions had merit. Slooh could not decide on a definite winner. I felt greatly honoured when my submission was named joint winner.

This Supermoon Challenge went deeper than just a winning image. Every evening I took images of the Moon and thought of my four grandchildren as I remembered a song my mom used to sing to me, Que Sera Sera. I thought of my friend who invited me to Leipoldtville to witness the sodiacal light. This image became a reflection of life. Dream..catch..hold.. appreciate.. Tomorrow life may be just a slither of what it is today.

I looked up at the Moon and knew that this evening would be my last public outreach event. From now on it will be only me and my telescope or camera. This sounds kind of depressing but when I’m alone under a star filled sky, finding new objects but never forgetting to look at the familiar ones as well,  I am at my happiest.

I will always remember this particular eclipse of 27 July 2018.
A dear friend has come to the end of his teaching career. I have come to the end of a most wonderful journey of bringing Astronomy to the public. I hope I have inspired many to look at the night sky and hope to continue but just in a different way.

This Moon is dedicated to all who are letting go of the old with a touch of sadness as they enter a new stage of life.