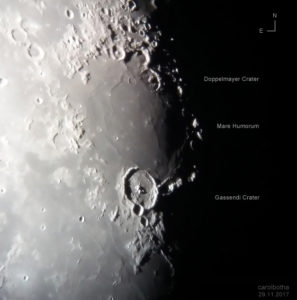 I’ve been doing my fullmoon shots with my camera and 400mm lens on a tripod for some time now.

Then along came Slooh with the #supermoon- challenge which inspired me to go out for a few nights in a row to capture the waxing Moon.

I thought, what if I attach my cellphone to my telescope? This is when the real fun began. I’ve been able to push to a 6mm eyepiece but you have to be really quick if you have no tracker on your scope like me It’s quite tricky.

First I identify the area that I want to shoot – then focus the telescope with cellphone attached. I bought one of those adaptable cellphone holders. A word of caution – cellphones slip easily if you’re not careful. When I’m happy with the adjustment of the cellphone holder and focus is ok, I nudge my telesope so that the area to be shot is just outside of the field of view. As the area moves into view I take shots with a feather light tap on the cellphone screen. Then it’s to my computer to sort the blurry ones from the not so blurry ones! If your telescope has a tracker, things will be much easier but then you’re most probably already doing astro photography for real 🙂

Someone suggested that I should try to zoom in more but believe me, it will get really tricky if you are already using a high powered eyepiece because the motion of the Moon becomes intensified. Others advised that I should use continuous shooting. One could experiment with this but I have had no luck up to now. My cellphone’s camera seems to adjust focus and my continuous shots have all been very blurry.

Each cellphone is obviously different. The camera’s auto setting will most probably not give the best result. With some of my shots I even tried the “beauty” setting . So just play around with what you’ve got and try all your modes and exposure settings. The holders come in different sizes so make sure the dimensions will fit your phone. Read reviews on the different makes of holders before you buy. Some guys in my astronomy group have printed their own holders on a 3D printer.

Instead of going into a slump after the supermoon adventure, I will continue seeking interesting formations on the Moon. Eventually my plan is to do sketches of the images that I captured during this challenge.