My first taste of movies was on home cinema. Up to this day I do not like any slapstick comedy which involves pie throwing, slipping, face slapping, falling ladders, tipping paintbuckets, hair pulling, eye poking, “tit-for-tat” fights or trio’s named Moe, Larry and Curly!
I know that to pull off this style of comedy requires great timing, overly animated facial expressions and nifty acrobatics. Still slapstick comedy would not be my choice of movie including the ones with ‎Stan Laurel‎, ‎Oliver Hardy or Charlie Chaplin listed in the cast.

Being five years younger than my sister, made me wise to the world of a teenager before my time. I witnessed her go through puppy love stages and was allowed to go along to home parties (as chaperone and tattletale) and to proper cinemas.

Polyanna was an obvious favourite but “Tammy” with Debbie Reynolds left a huge impression. How modern teenagers would laugh at the innocent portrayal of Tammy falling in love. A series of four Tammy movies were made between 1957-1967. It’s the first one (Tammy and the Bachelor) that I remember very well. I sat in a huge Loquat tree and sang ” Tammy’s in Love” over and over again. I bet I would have fallen from the branch out of fright if love had really come knocking at that young age! The “old hootie owl, hootie-hoo’s to the dove” was most probably the only part in the lyrics that I actually understood. 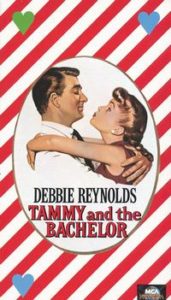 Luckily Saturday afternoons spent at the Alhambra or Colloseum opened up a whole new experience. No more slapstick – an eight years old was on her way to becoming a serious moviegoer.