Neither VW Golf nor Lenny Kravitz were around when I was born, but what must be one of the best VW television commercials (For the love of the Drive) has taken me back to a day in 1952.

I was born in Vredendal, a town in the northern Olifants River Valley in the Western Cape province of South Africa. From then on the15th of December was circled on every year’s calender as an important date by familie and maybe a handful of friends. [note: we were three siblings – I was not born nr one but filled the insignificant middle position!]
What I know about my birth is that I was born just before midnight and one of my early childhood friends just after midnight in the same nursing home (as those establishments were called back then) Up to this day I have never forgotten this bit of (useless)information, although I bet astrologists would love to dig up all kinds of weird and wonderful personality traits. My friend and I had totally different personalities but I’m quite certain it had to do with genes rather than two, either side of midnight, events. 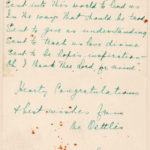 A memento that I have cherished and one that miraculously did not land on a dumpsite, is a little gift card signed “The Oettles, Lausanne. Vredendal”
From the looks of things, the chubby baby in old photos seemed to be happy and adjusting well to life in her world.