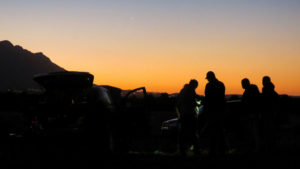 Date: 14 April 2018
Location: Riebeeck Kasteel
In a field with 380° horison on a farm owned by the Truter family, famous for their Deli-co farmstyle butchery
Sky quality: SQM reading 21.19
Seeing: 3/5 (twinkling of stars noticeable)
Conditions: windless, no clouds, some skyglow low on the eastern southern and western horisons but nice and dark to the north.

We kicked off by observing Willie Koorts’ drone as it went high up into the sky and into Canis Major! Yes Sirius had just appeared.

At the same time Venus became brighter over Riebeeck Kasteel putting up a spectacular show.

As it grew darker there were a myriad of objects to choose from. I started off with Orion as it would be the first to set in the west.
Alnitak, Alnilam and Mintaka (the belt) are always a welcoming sight. From them, orientation at a new location is quite easy.
The stars Betelgeuse and Rigel, the Orion Nebula and from there on to Canis Major, (the big dog) and its brightest star Sirius – were all familiar constellations that we meet up with regularly during our summer outreach events at the Taal Monument in Paarl. Later on at some stage Willie commanded all laser pointers to be directed at a different star in Canis Major. Serena will notice her laser pointer on Sirius! The photos of this will be appearing on Facebook. Open cluster Messier 41 showed up beautifully in binoculars.

The Constellation Puppis lies close to Canis Major and I had to visit my favourite open clusters, M46 and M47. In binoculars both clusters can be seen is the same field of view. The wonderful surprise in M46, is the planetary nebula NGC 2438 which is actually not related to, but seems to be embedded in the fine cluster. This object was my first ever observation of a planetary nebula while on an excursion to Sutherland in 2007.

The stars of the Southern Cross lured me to the southern part of the sky. I always check to see whether the jewelbox NGC 4755 is still as beautiful as ever and it was! Next up: double star Acrux (alpha Crucis)
The coalsack (dark nebula and one of the Big 5 of the African Sky) was clearly visible and Johan le Roux took awesome photos with his Cellphone!

The half-man half-horse, Centaurus, is sort of jumping over Crux.
Clearing all obstacles were alpha and beta Centauri (the pointers which represent the front leg of the horse) The huge globular cluster Omega Centauri (a Big 5) riding on its back was a popular target.
Centaurus A , the muscular shoulder of the half-man was described by John Herschel as “two semi-ovals of elliptically formed nebula appearing to be cut asunder and separated by a broad obscure band” Centaurus A is in fact an elliptical galaxy. Wikipedia states that NGC 5128 is one of the closest radio galaxies to Earth, with an active galactic nucleus.

A friend, Aubrey Janse van Vuuren commented that we were a very vocal crowd. Well speaking for myself, I get so excited when I find all these beautiful objects that I want to clap and whistle just like at a rock concert.

I think it was George Bence who mentioned the Blue Planetary Nebula. Going through previous obs, this is what I wrote in 2010: “pn in Centaurus. Quite easy to locate near Crux. Like most planetary nebulae it is tiny. It appears bright blue and surrounded by a bluish halo. It lies in a rich star field”
I did not notice the halo this time and 8 years ago I must have been very fit saying that it was easy to locate! but with the help of a go-to  Meade belonging to Willie Koorts, we observed the planetary nebula that also goes by the name of The Southerner (NGC 3918).

There’s a fly (Musca) sitting on the hoof of the Centaur. I could not see the dark nebula with the funny name of the Dark Doodad from this location but I did see the fuzzy globular cluster NGC 4833.

The Large Magellanic Cloud stood out clearly. I was a bit disappointed with the Tarantula Nebula. It seemed very dim with little contrast but I must add I was working with begged and borrowed eyepieces but it could have been due to skyglow on the southern horison as the Small Magellanic cloud was not visible either.

Willie mentioned the Southern Ring Nebula. I know this planetary nebula as the Eight-burst Nebula and found the catalogue designation NGC 3132. Thanks to the spot-on searching abilities of the Meade, Willie tracked it down in the constellation Vela and in no time. We could actually see the central star!

I spotted another planetary nebula on ASSA’s top 100 list – the Ghost of Jupiter Nebula in Hydra. Again Willie guided his scope and a beautiful bluish disc appeared like Jupiter shrouded in mist. This was so cool to observe as the real Jupiter was showing off its bands and moons to the east.
Favoured by many as the best observation of the night was another Hydra object: M83– a bright barred spiral galaxy. I could just make out the spiral arms and I cannot wait to observe this galaxy again in pitch darlk skies and with my larger telescope.

M 44 – the Beehive Cluster in Cancer, could be seen clearly with the naked eye. Castor and Pollux beckoned me to Gemini and invited me with open arms to the open cluster M35

Our list of obs for the evening was growing:M 65 and M66 in Leo (two galaxies showing in the same field of view) To see the third in the Leo triplet we would have needed a wider field of view. Just seeing the upside down Leo sickle was awesome.

I promised Serena that I would observe M4 in Scorpius and I don’t think anyone visits Scorpius without looking at M6 ( the Butterfly cluster) and M7. There is a globular cluster NGC 6453 very close to M7 which I have never observed. Maybe that should be my next target.

I wanted to see the last object of the Big 5 of the African Sky before I left: The Milky Way, Sagittarius region. Jan Visser pointed out the Teapot asterism rising in the east and even though the centre of our galaxy was low on the horison and in cosiderable skyglow, the Milky Way in that region was prominent but light pollution from a nearby village made imaging difficult.

Some folks were leaving, Willie was experimenting with time-lapse photography and had even more tricks up his sleeve. Mars was quite high above the horison and as I was saying final goodbyes, the Northern Crown in Corona Borealis caught my eye and I wished that I still had the stamina of years ago when I could go from dusk to dawn.

Thanks to Mike Leppan for organising this event, Jan Visser and Hansie Schreuder for driving to Rebeeck Kasteel with me, to all my astronomy friends and especially Willie and his Meade for another incredible stargazing adventure.