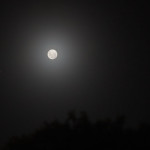 So often when I ask people whether they have seen a specific bright star, I get the answer oh no, I am not a morning person or oh no, that is long past my bedtime. Well I am afraid you have no excuse now. Jupiter is shining bright towards the north after sunset with Mars, the Moon and then Saturn following from the east. I would say three planets and the Moon before bedtime is very good going. Even though Jupiter sets just around midnight, Saturn, Mars and the Moon are putting on a splendid display to entertain night owls until the early hours of the morning when dazzling Venus comes gliding in from the east to herald the day. For the next week or so even Mercury will be visible low on the eastern horison at dawn.

Now what else could there be to prevent you from taking a quick look at the night sky during the next few weeks? I already know the answer because I have just been outside to behold the heavenly sights. After a week of deceptively glorious days, this sudden chilly wind is proof that the Sun has moved 10.3° northward and I’m told the length of day has decreased by 44.6 minutes from the 1 April. Oh yes, without a doubt, Mars and the Moon are making a beautiful pair with Spica, the virgin-star looking on but let me quickly rush inside to put on warm clothes before I venture outside again to seek out Saturn hiding behind the tree.