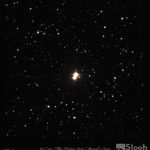 Night after night I get to observe the most beautiful objects. I was encouraged to take a walk through Cygnus and came across a beautiful double star.

The system was named ‘The Flying Star’ because of its high proper motionIn 1753 James Bradley noticed that 61 Cygni was a double star.

The Flying star was christened as such when Giuseppi Piazzi demonstrated the sideways motion of the system. The star attracted the attention of astronomers. They realised that the star had to be atronomically close to the Sun.

The distance to 61 Cygni was measured by F W Bessel in 1838. It was the first distance measurement to a star by observation. He came quite close to the actual value of 11.4 light years away.The star also goes by the name of ‘Bessel’s Star’

Although The Flying Star was outranked by Kapteyn’s Star, Barnard’s Star and other into seventh place on the list of stars with high proper motion, it remains number one when filtered to those with naked eye visibilty.