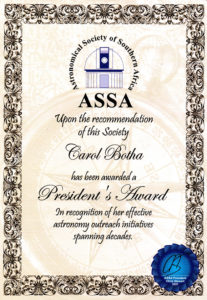 I suppose everyone likes to be recognized and receiving an award is definitely an honour. Apart from regular school certifcates, college diplomas and a few Sunday school stamps, I was never in line for big awards. As far as monetary prizes go, I won a few cents at a regional debating contest. I was taught never to boast and humbly stored my awards in a box except for the few-cents-award, which bought me a packet of sweets.

When astronomy became my full-time hobby, I was at an age where I had dropped most shackles and pretence and I started to acknowledge human’s basic needs – one being a desire for validation. However, I never needed this validation in the form of an official award. The utter glee on the faces of children, the oohs and wows of grown-ups at my telescope were more than enough reward for me. I feel that my awards are not mine alone but belong to all who bring me happiness as well as those who are prepared to share their knowledge and inspire me.

Once, I had an inkling that I may get a certificate for my first 20 deep sky observations and sketches. The award came at an outreach event when I was least expecting it and my reaction, apart from jumping up and down, was hugging the Deep Sky Director into a blush. If only I could find and destroy those embarassing photos of that occasion. Friends love to let them surface every so often.

Human psychology plays a big roll in the giving and receiving of awards. The number of awards handed out daily is astounding. When it comes to awards, I’m aware that human behaviour is influenced by direct or indirect incentives. I never want to find myself being driven by awards alone nor would I appreciate an award which comes with a certain expectation.

I could blame my jumping up and down on an overactive hypothalamus and over production of dopamine but no, at my age I think I’m entitled to brag. Who knows whether I’ll have the energy to go for gold. As long as I can inspire and bring a little happiness to every person I meet along my way, I’ll be sure to produce enough of that vital chemical to ensure a happy life. 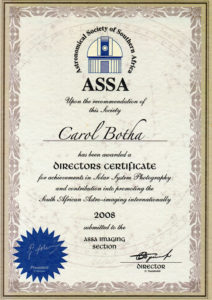 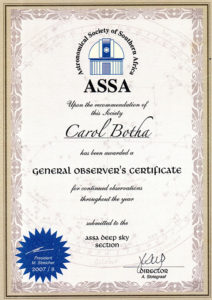 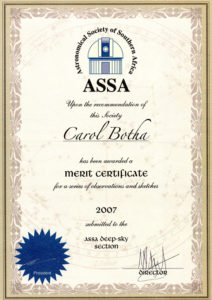 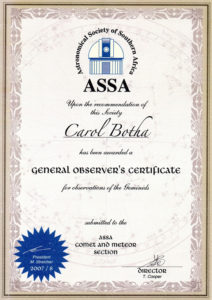 To become a member of the Astronomical Society of Southern Africa visit https://assa.saao.ac.za/