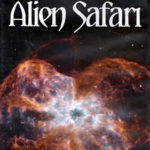 Yesterday was Mandela Day in South Africa. On this day people of the world are encouraged to  give just 67min of their time to support a worthy cause, as opposed to the 67 years that Nelson Mandela had fought for social justice.

I spent my 67 minutes at a book/dvd sale in aid of an orphanage.

I came across the National Geographic dvd, Alien Safari. It has been posted on YouTube as well, by far not the quality of my Mandela Day copy. Produced in 2009, Alien Safari does not have all the latest on space exploration but it delves into a big question.

Where should we be looking for extra-terrestrial life?

When talking about aliens we immediately think of creatures with similar features to us. We allow a bit of exaggeration where it comes to the size of eyes and ears but when it comes to stature we prefer them to be shorter 😉

Biologists obviously take a more scientific approach.  In searching for extra-terrestrial life they go to places with the harshest environments on Earth, where they have found the existence of extremophiles and thermophiles and where conditions could be comparable to those on some of our solar system’s planets and moons.

Where are these alien creatures lurking?

Scientists believe that we should be searching beneath the surface of salty “puddles” or in lava tubes on Mars. Maybe bacteria are metabolizing the carbon dioxide in the cloud tops of Venus, producing sulfuric acid aerosols. Could Callisto’s icy crust be hiding an ocean, a scuba diver’s paradise? Are microbes skiing on the flowing glaciers of Ganymede? Does Europa have pressure vents similar to those off the coast of Ecuador? What’s breathing beneath the surface of Enceladus, causing carbon dioxide and methane in its plumes of vapour? Are there living creatures immune to cosmic radiation on Titan?

Bless all the scientists that are doing ongoing research. Their findings are intriguing. Although what we’ll find now may be very tiny, let’s not forget where it all began for us.