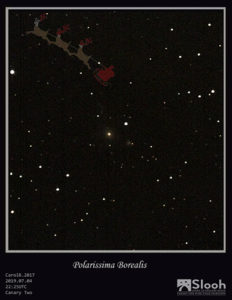 My reasons for going with online robotic telescopes, were the limitations of my own backyard set-up and wanting to see beyond the horison of the southern celestial hemisphere.

I discovered that travelling to outer space to explore the northern celestial hemisphere was not that complicated after all. I made travel arrangements (by means of membership) with Slooh and each night I hop on one of the seven robotic telescopes to wherever I want to go

Travelling to these distant places takes some preparation. What kind of experience am I hoping for on a given night? Do I want the extreme thrills of seeing galaxies being ripped apart or would I prefer going slowly, gliding over the stars of delicate open clusters? Some prefer big and bright. I do love the “wow” factor of beautiful celestial wonders but mostly I tend to wander off the beaten celestial track.

It’s not close to Xmas yet but recently I reserved a mission to Polaris. At least I had to get aquainted with the north pole star. As I tried to determine which of the stars in the field of view could be Polaris, I discovered a very faint object close to the star almost central in the image. Not only had I found Polaris, but I also learnt that the faint object close by was in fact a galaxy, Polarissima Borealis (NGC 3172)

Trying to find all I could about this galaxy, I stumbled upon a delightful story on DeepSkyForum about NGC 3172. It took some intensive searching to reach the author. (Mark – thanks for giving me permission to share this)

Mark Friedman had become a grandfather just before Xmas and thought it would probably be a good idea to brush up on tales about jolly old Saint Nicholas.
Conjuring up memories of his youth, he recalled that Santa and his team of elves lived and worked in a place called the North Pole. Googling he found many locations claiming to be the home of Santa and the elves. Taking into account the billions of kids who qualified for presents, he calculated that such a location needed huge infrastructure for all the homes, sheds for the sleighs and to house the workshops. None of the locations that Google suggested seemed suitable for such a massive concern.
Suddenly it struck him – there must have been an omission in the old folk legends. The word “celestial” was never mentioned!
Out came his telescope. Locating Polaris, the north pole star, was easy but as it goes with astronomers, he scanned the nearby sky as well and there he spotted the very faint galaxy Polarissima Borealis. No more doubts, all this while a galaxy has been home to jolly Old Saint Nicholas and his elves!
I bet Mark can’t wait for his grandchild to be old enough to share his discovery.

NGC 3172 was discovered by John Herschel in 1831and added it to the Slough catalogue as JH 250 (Slough being his home observatory in Slough, Berkshire, England)
John Dreyer later catalogued the galaxy as NGC 3172
There is another very faint smudge close to Polarissima Borealis catalogued in the Principal Galaxy Catalog as PGC 36268.