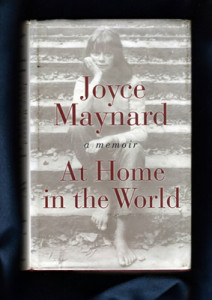 I think there was one copy of Catcher in the Rye, which belonged to my English Literature teacher, doing the rounds and by the time I left school it hadn’t landed in my lap. I was eighteen with a whole new world out there and I embraced it leaving everything to do with high school behind me – even J.D Salinger. Now I can’t remember if or when I read Catcher in the Rye eventually. It certainly did not leave a lasting impression.

Salinger was the last thing on my mind when I stood in the biography section of our library. I was actually looking for an interesting read for my husband when I came across At Home in the World  by Joyce Maynard. I loved the cover photo and popped the book in my basket. I did not get around to reading it but decided to extend the loan by two weeks.

Who is Joyce Maynard who feels At Home in the World? The library’s info  dockets obscure most of the inside cover and front page photos.There is a nice photo of the good looking author on the back flap. “Joyce Maynard is a well-known journalist and broadcaster in the United States. She is the author of several books, including To Die For (which was made into a film by gus Van Sant starring Nicole Kidman), Baby Love and her memoir Looking Back, which she wrote at the age of eighteen”

There are family photos- one has become my favourite: a young girl sitting on steps. There are also a few sketches that accompany a letter: “Dear Jerry” Now I’ll have to read the book because I can’t find my magnifying glasses to read the letter!

OK, but maybe I could save some time. The front flap seems to have quite a lot of info. “Maynard wrote a cover story for the New York Times Magazine called An Eighteen Year Old Looks Back on Life. Among the hundreds of letters she received in response was one from the famously reclusive author J.D. Salinger” Goodness gracious, Salinger after all this time.

I have read this book from cover to cover. Now there are two more books lying on my table: Catcher in the Rye and Franny and Zooey.

Looking back on life, I remember eighteen and I remember Salinger but all of that has taken on a new dimension and I  can’t really decide whether or not to  like Salinger.

I should have spent more time writing about Joyce Maynard’s Memoir but I feel the need to publish this today. In any case, it is her memoir and everyone  should read it in her own words.

And on remembering being eighteen, who could forget the lyrics in the song, I’m Eighteen? If we had Facebook in those days this would have deserved a smiley.

Lines form on my face and hands
Lines form from the ups and downs
I’m eighteen ,eighteen, eighteen
and I like it, like it..
I’m Eighteen © Copyright Writers– A.Cooper/M.Bruce/G Buxton/D.Dunaway/N.Smith
published by- Bizarre Music/Ezra Music Corp.

To read: An Eighteen Year Old looks back on Life
https://www.nytimes.com/books/98/09/13/specials/maynard-mag.html