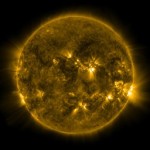 Courtesy of NASA/SDO and the AIA, EVE, and HMI science teams

Something big is about to happen on the Sun. According to measurements from NASA-supported observatories, the sun’s vast magnetic field is about to flip.

“It looks like we’re no more than 3 to 4 months away from a complete field reversal,” says solar physicist Todd Hoeksema of Stanford University. “This change will have ripple effects throughout the solar system.”

After reading this I looked through the window at a cloudy winter sky. In 3 – 4 months the smiles are supposed to be returning to our faces here in the Southern Hemisphere just like the Beatles promised. Now it seems we are in for some stormy space weather.

How much will this event effect us here on Earth this time?

Every eleven years (give or take a year or two) the Sun goes through a sunspot cycle which is linked to magnetic forces. Now what have magnetic forces got to do with pole reversals?

Reading up on the Parker Solar Dynamo Theory, only to learn that the theory was flawed, I proceeded to the Babcock-Leighton Model until I hit the sentence: Unfortunately it could not offer a prediction…..

OK so now I’ve wasted some time but not to be deterred I googled until I found written in bold: And the answer is….

ah ha!
Two separate processes seem to be going on: The Local Dynamo and the Global Dynamo. Before attaching major significance to a whole lot of really weird terms like the Tachocline and helioseismometry data from SOHO, I scrolled down to the bottom of the page just to make sure I was on the right track. “There are still many details to be worked out….”

While the physicists work on the many details, Kid’s Astronomy gives a nice explanation. Solar Magnetic Field reversals occur more or less every eleven years and at a time when solar activity is at its peak. Solar storms travel through space towards Earth. Energy and radiation from solar flares and coronal mass ejections can harm astronauts, damage electronics on satellites, cause the most beautiful auroras blackouts on Earth by surges in power grids.

There have been predictions that the upcoming solar storm will outdo the 1859 Carrington Event, a super storm so intense that the Northern Lights could be seen from Rome!