For a considerable time I have been noticing a white glow in the Betty’s Bay night sky. At first I thought that someone had installed an unshielded outside light while on holiday, then went back home and left it on to shine forever.

Heading back to the city one early morning after a night of stargazing, the bright illumination of the Caltex garage and specifically the Caltex sign stood in stark contrast to the rest of Betty’s Bay, which still lay blanketed in natural darkness. All I could think about for a day or two was the fuel station, which at night seemed so alien. One Caltex sign would not be able to obliterate the whole Milky Way but a few more highly illuminated hotspots could do severe damage to our natural night sky. Even though the chances of getting a response from such a giant company were most probably nil, I wrote an email.

You can imagine my surprise when I opened my inbox a few weeks later.

“Thank you for your email. Please accept our apologies for attending to your query at this late stage.We are currently working our way through a backlog as we have been inundated with queries over the last few weeks.Could you kindly provide your contact number so that we may contact you?”

Thus started my communication with the Customer Service Centre Chevron South Africa (PTY) LTD. My query was forwarded to the relevant department. I was updated regularly on the progress of the matter. “Please be advised we are still in the process of investigating and finalizing your query”

On 2 July 2014 I recieved a call and was put through to a manager, in charge of a certain cluster of service stations, who had this to say:
1. The erf on which the service station is located had been zoned for the purpose of running a fuel station. They were granted all the legal rights from the municipality
2. The illumination is in accordance with national regulations
3. The signage is in accordance with national regulations
4. No, they do not differentiate between urban, rural or sensitive fynbos areas when it comes to the amount of illumination used.
5. The service station is there to stay ( which of course I had not queried because lets face it, I need fuel as well as the Milky Way)

Well, at least someone had taken the time to attend to my query and had actually responded. “Yes I understand. Thank you for taking the time….” I was about to say goodbye….

“But what we will do……The sign has recently been damaged by the wind. During repairs we will remove the sensor that automatically switches on the light at nightfall. The service station closes at 6pm. The light will be switched off then. Please go and remind the retailer if they forget to switch off the sign. The downlights over the pumps will, unfortunately, have to remain on throughout the night.”

Caltex will be switching off its sign! If each of us would switch off, use motion sensors or at least shield outdoor lights, the natural night sky could be preserved for generations to come and not become the legend of Betty’s Bay and its Milky Way. 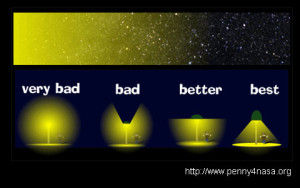