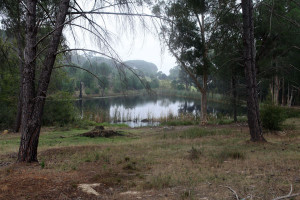 Once on a misty-rainy day, I was invited to attend a private funeral on the slopes of a mountain. The forest trees stood in misty silence, a few springbuck grazed on a hill, the gravel crunched under solemn footsteps, a grave had been prepared. Nearby a fallen tree was home to termites. Flat gravestones, cut from mountain rock and polished, lay randomly under shrubs in bloom.
A bamboo coffin, suspended by broad white ribbons, was lowered with a gentle brush against the lush green leaves that framed the grave. A close friend read a poem, I read a quote from Tolstoy, a wife lay her husband to rest while a little bird sang along to the sound of a recording of Nimrod, from the Enigma Variations by Edward Elgar. The rain’s touch was light as we pondered the misty reflections on the lake. That was the day that death became part of life for me.