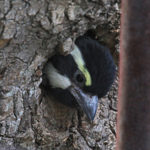 It all began when we had to take down a huge Euphorbia Ingens, commonly known as the naboom, as it was becoming hazardous. While we were at it, we lopped a second smaller tree as well. The large trunk went to a garden refuse site (big mistake – we should have kept it!)  A honeysuckle was planted to camouflage the remaining naboom trunk.

The creeper flourished. The naboom died providing an attractive abode for bumblebees and wasps.

A few years went by. It was a beautiful Saturday morning. Something about the smooth rhythm and constant hammering of a neighbour doing woodwork sparked my curiosity. The typical Saturday morning sounds turned out to be coming from a pied barbet which had, by that time, carved quite a substantial hole in the naboom trunk!

Male and female took turns to prepare the nest. They took extreme care with the size of the hole, chiselling bit by bit, hopping in and out and testing it for size. So it came to be that we had our first barbet family living beneath the rambling rose gazebo which was my 50th birthday present from my husband and where I was going to spend hours reading or having tea or whatever. I was obliged to donate my gazebo to the barbets.

The cycle of knock-knocking, brooding, hatching, cleaning and resting has added a certain rhythm to our lifes. We have and seen many broods hatch from that hole.

To remain happy and entertained, the barbets eventually needed new nesting logs. I bought sisal logs at the nursery but although they enjoyed chomping holes into those, they always preferred the original hole. We should have never discarded that Euphorbia Ingens trunk. I would have had an abundant supply of nesting logs.

I embarked on nest maintenance, removing the decayed top third of the trunk, covering it with an upside down plastic plant container to keep the inside of the log dry. Eventually after two more seasons I had to take down the whole trunk. One part (which included the original nest) I could use as a log and secured that on a pole.  Barbets will only construct a nest in a hole about two-four metres off the ground and the log has to slant slightly.

From then on I kept my eyes peeled for any cacti, palm, acasia or other suitable hollow wood logs. I sometimes wonder what the people in my neighbourhood think when they see me walking down the road with logs and all kinds of dry branch material. Recently the car attendant at our library came to my rescue when he noticed me struggling to fit a log into my VW Beetle. From now on he will also be alerting me if new “old” logs become available.

Barbets don’t like fresh and green. It’s dry and hollow they’re after but never brittle. The logs have to have a substantial circumference – sometimes they squeeze many birds in one nest during winter.

From my window I have a bird’s eye view of what’s happening in the nest. I have seen them breed about three times in one season – two chicks at a time. Seeing a chick peeping from the hole for the first time is so special- peeping just a little further each day, diving back into the nest at the slightest flutter of a leaf, moth or insect. Once the chick has surveyed the world and decided its ok out here, it pops out of the nest and follows the parents to a nearby branch for its first proper flying lessons. I was totally devastated the first time I noticed the parents refusing the youngsters entry into the nest as soon as they had flown the coop. It is the regular routine. One or two nights maximum and they have to make their own sleeping arrangements. This is why extra logs with extra holes are vital. Even more interesting is that the youngsters from the last brood are allowed to stay as long as they like! I can only think that with winter approaching, the extra “duvets” in the nest are most probably quite cosy. Once this last little family has bonded they leave the nest temporarily. This is breathing time for the nest – to rid it from parasites, I suppose.

During this time I do “home maintenance” They do check-ups while I’m at work. Well after sunset one of the barbets does the last inspection to see whether other birds are not attempting a take-over of the nest. They are not as vocal during this nest resting period as in the breeding season. I always wait in anticipation – will they accept my new log contructions or not. It would be a truly sad day if they stayed away for ever.

The barbets feed mainly on insects, worms and moths but during breeding season they like apple and even go to the birdseed feeder from time to time. We have a rubber tree that bears small fig-like fruits and they love those and I think it was this source of food supply that may have attracted them to the old decaying naboom log.

So far all but two of “our” barbet chicks have survived. The two that died were caught by a neighbour’s cat while taking flying lessons. We heard the parents calling for help and then we saw the lifeless little bodies. That was a very sad day. I’ve lost count of how many barbets we have had in our garden. We’ve become so accustomed to their calls and pecking that it would be strange if they were to leave.

My camera is not pointed at the hole in the log for hours on end anymore, taking pictures while watching the parents prepare the nest, taking turns on the eggs, constantly feeding, constantly removing pooh and the first glimpses of the little ones. I know the routine off by heart and just leave them be, except when their calls seem distressed. We assist in shooing away cats or Lesser Honeyguides who may be threatening the nest. They accept our “help” but that’s as far as it goes. If we were to interfere too much, they would leave for good.

It is nest resting time at this time of writing. I have erected an additional log. Will the cycle continue? 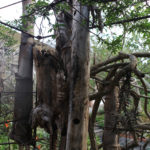 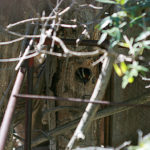 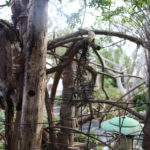 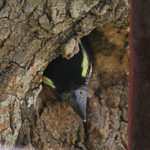 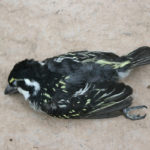