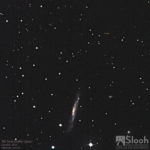 I followed an online mission to the Twin (Double) Quasar and took an image. I was not quite sure which of the bright dots represented the quasar. Fellow Slooh members introduced me to Aladin, the interactive sky atlas and I could identify the object easily.

“The Twin Quasar was discovered in 1979 and was the first identified gravitationally lensed object. It appears as two images, a result from gravitational lensing caused by the galaxy YGKOW G1 that is located in the line of sight between Earth and the quasar” – Wikipedia

The quasar lies about 14 billion light years from Earth in the constellation of Ursa Major. The huge elliptical galaxy YGKOW G1 lies directly between Earth and the quasar at 4 billion light-years away and acts as a gravitational lens. Its mass is so great that it can bend the light from objects lying behind it.

I so enjoyed a course Intro to Astro on Slooh by Dr Paige Godfrey where one of the topics was gravitational lensing. Now I have a practical example to add to my notes.