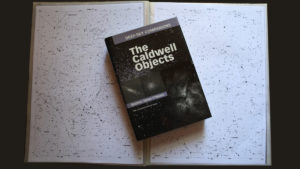 One fine day I received a note from Ilze Swart, who was Chief Librarian of Bellville Central Library for as long as I can remember. Ilze is still heavily involved with charity bookshops and many other interesting ventures. She knew about my passion for astronomy and when sourcing books she was always on the look-out for anything to do with astronomy.

The note read: I have some books at reception that you might be interested in. As always I did not let the grass grow under my feet. It was like going on a treasure hunt. There at reception was a box with my name on it. As usual I took the whole box, left my donation in an envelope, rushed home to see what Ilze had found.

Sometimes there were books that I already had.Those were most appreciated too, as I could share them with my friends. Sometimes there were wonderful children’s books. In the end I think I could officially claim that I had the most astronomy books in the Western Cape.

Anybody into Astronomy would know how I felt when at the bottom of this heap I saw The Caldwell Objects by Stephen James O’Meara – a book in such perfect condition, as if I had just purchased it from an exclusive book store. Ilze had discovered a great treasure.

Some may have seen me carting my 12″Dobsonian on its barrow wheels. For years this telescope has taken me on night sky adventures while becoming aquainted with the night sky. I have observed the most amazing objects but as you become more experienced there is a limitation to what you can observe through a standard newtonion without tracking.

Observing all the objects in a catalogue is a challenge but the major sense of achievement on completion always makes the effort worthwhile. At the very least I would have to complete the Messier catalogue to earn the badge of serious amateur astronomer. Charles Messier never observed the far-southern skies and so many beautiful objects never made it onto the list of 110 best objects.

Sir Patrick Moore came up with a catalogue of 109 objects, some visually stunning, some quite obscure but astro-physically intriguing (as James O’Meara put it). So I was quite happy to observe the stunning and read and see images about the obscure in my book until hey, wait…I’m a Slooh member now. I can set up missions to any object. One of the quests on Slooh’s website is: The Caldwell Challenge!

After completing my Messier Challenge Quest and quite a few more (22!!), writing an article for ASSA’s NightFall, pruning the garden, washing windows and preparing enough frozen meals to last for a while, I can now procede with the Caldwell Challenge.

Durbanville Children’s Home is one of the oldest children’s homes in South Africa, dating back to 1883. As a registered institution of care, they are currently tasked with looking after 144 children who were placed here by court orders
Their motto: All children have wings, we teach them how to fly.
https://www.durbanvillekinderhuis.org.za/