With the prospect of reusable rockets in the future, a story about a 50 year old system may seem anachronistic, but for people who lived through the triumphs and disasters of the Apollo programme, the mighty Saturn V rocket (pronounced “Saturn five”) holds a special place in history.
In 1969 I did a Greyhound bus trip around the USA and by a quirk of fate happened to be at the right place at the right time. On the 20th July 1969 at the Grand Canyon I was privileged to see a grainy, almost ghostlike video of the first lunar landing. It was only many years later on a visit to the Smithsonian National Air and Space Museum in Washington DC that I realised why NASA pipped Russia to the Moon. Statistics between the Saturn V and N1 rockets tell only a small part of the story but in this case size did matter. The Saturn V burned 21 tons of fuel a second – incomprehensible to mere mortals. It remains the largest and most powerful man made vehicle ever built.
https://en.wikipedia.org/wiki/Saturn_V 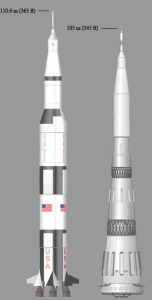 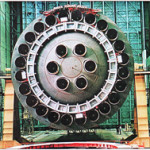 The Russian N1 rocket was almost as big as the Saturn V, a bit shorter and a bit lighter, but it had more thrust out of the gate – which probably was its downfall. The N1 had a lot of engines – 30 little ones – 24 tightly packed to form a ring around the outside of Block A, the name of the first stage, with six placed in the centre to provide roll control. The thinking was that if one of these small engines was good, then strapping them all together would be great but this went horribly wrong. All four N1 test launches ended in failure. None so spectacularly though, as the second launch attempt: the rocket exploded with the force of seven kilotons of TNT, equivalent to a small nuclear bomb. It remains one of the largest non-nuclear explosions in human history. https://en.wikipedia.org/wiki/N1_(rocket)

By comparison the Saturn V with only five engines (where the name derived from) had a relatively simple system. It still had six million different parts, yet never resulted in a fatality. The Apollo 1 astronauts were tragically killed, but that was due to a failure in the command capsule oxygen system. 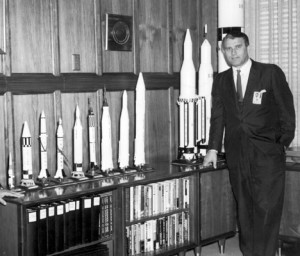 Much of the success of the Saturn V rocket was due to Dr. Wernher von Braun who was the technical director at the rocket research station at Peenemunde, in north-eastern Germany during World War II and later became a citizen of the United States of America in 1955.
http://www.space.com/20122-wernher-von-braun.html